I am not sure I enjoyed the overnight boat ride across the Adriatic. Sure it was a smooth journey and there was electricity in our room to ensure that our handphones did not die on us. But the cabin, a private en-suite double, cost us a total of S$200 and I had no good reason to praise it. I could have got a much more decent room at that price in an expensive Western European city. Breakfast was also mediocre although I was not hungry that morning and only ate it because it was included in the price of the cabin.

We docked at Bari at about 8 am in the morning. We got down to the hatch and waited for it to open. As it opened and the morning light came streaming in, there was a decidedly “雾锁南洋” (“The Awakening”) quality in that moment. I walked out of the boat onto dry land with the haunting introduction of that show’s theme song playing in my head.

We had to walk about 5 minutes to get to the customs building. That was alright with us although we would later discover that there was a shuttle bus to take us. E and I were however happy to be somewhat near the front of the queue since it meant getting cleared sooner. Or so we thought. The customs officers decided that Italians would get to clear customs first and so the rest of us aliens had to wait. Nevertheless, I could swear that I saw a couple of Japanese tourists joining the wrong queue (and no one stopped them) and they got to clear customs with the Italians. And the Italians kept coming, and we aliens had to keep waiting whenever they showed up. I half suspected that maybe they would clear all the Italians coming in that day and we would have to wait till sundown before we could have our turn. What if the Italians kept coming in round the clock?

Some family with a baby from God knows which country had the bright idea of using the baby as a reason to get to the front of the queue. Apparently babies had priority in the queue although no one else seemed to have heard of that. No one was pleased with it but somehow the family got their way. A Chilean couple on the other hand had a flight to catch and after they realised that they were going to be late asked everyone in front to allow them to jump the queue. We of course agreed although I wonder if they had much luck at begging the customs officers to clear them sooner. I hope they caught their flight.

In total, E and I waited for about 2 hours to clear customs. Standing in a queue for 2 hours was not a nice way to start a day and definitely not the right way to welcome visitors. It was absolute rubbish.

Having wasted those 2 hours in that queue meant that we had less time for our target, Alberobello, today. To make matters worse, leaving the dock area was somehow a little challenging because we just could not find the damn exit, and then we had some difficulty finding the train station once we finally got out. It was a miracle that we even managed to catch the next train after the one we had originally planned to take but could not no thanks to the efficient customs services of Bari.

The train ride to Alberobello was a pleasant one thankfully and we got to the little town in no time. I finally got to see the trulli of Alberobello!

A trullo (plural trulli) is a traditional Apulian stone hut with a conical roof. It really must be seen to be believed. The whole time I was in Alberobello I felt like I was in the Smurfs’ village. E was walking around saying how cute they all looked. I was just glad that I was alive to see them. The trulli are just so special I would not even know how to describe them properly to anyone!

I will therefore let my pictures do all the talking for me. 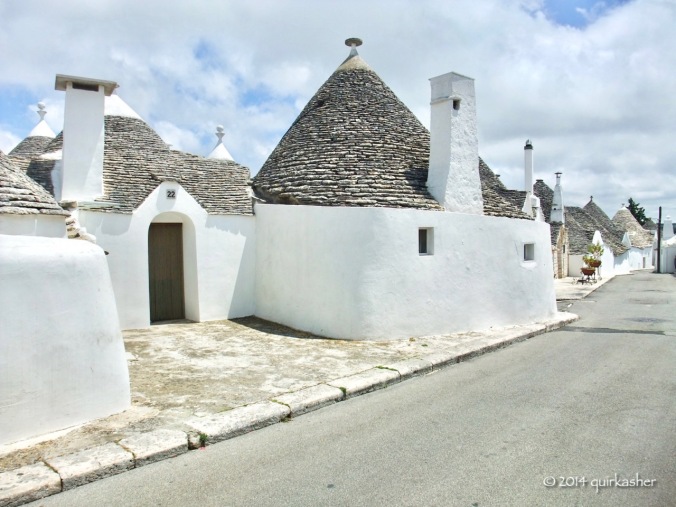 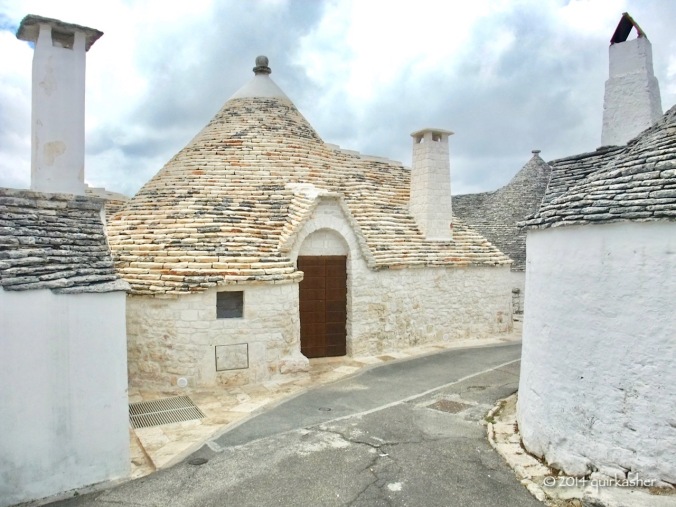 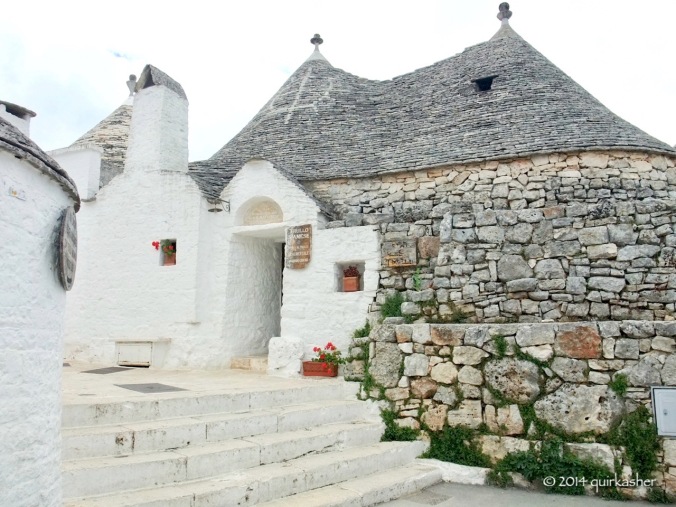 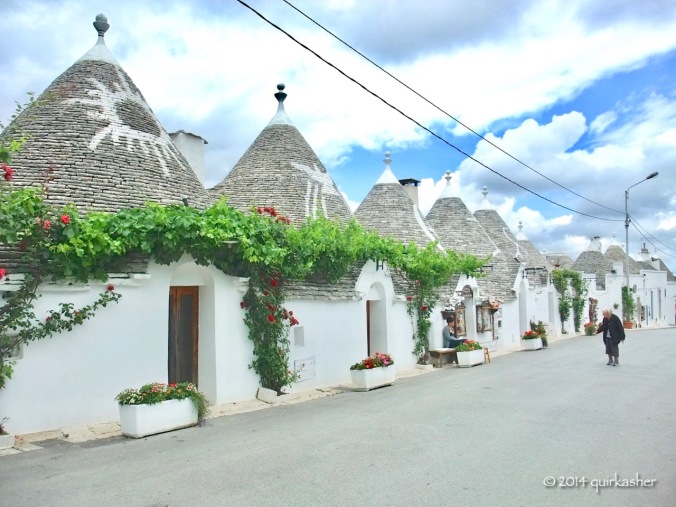 Row of trulli with roof art 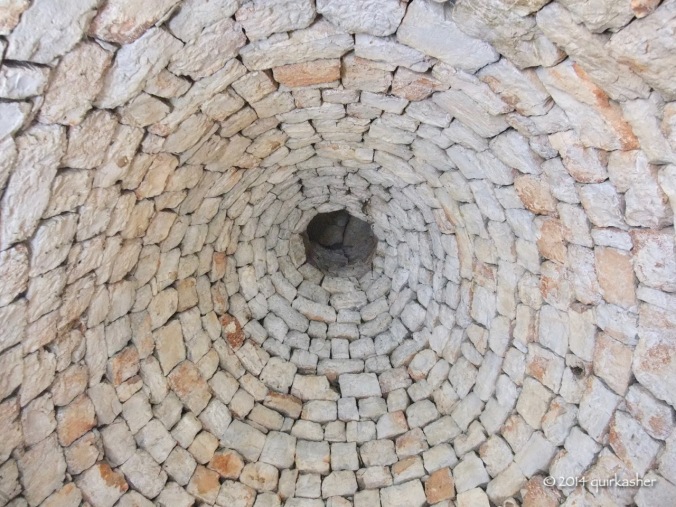 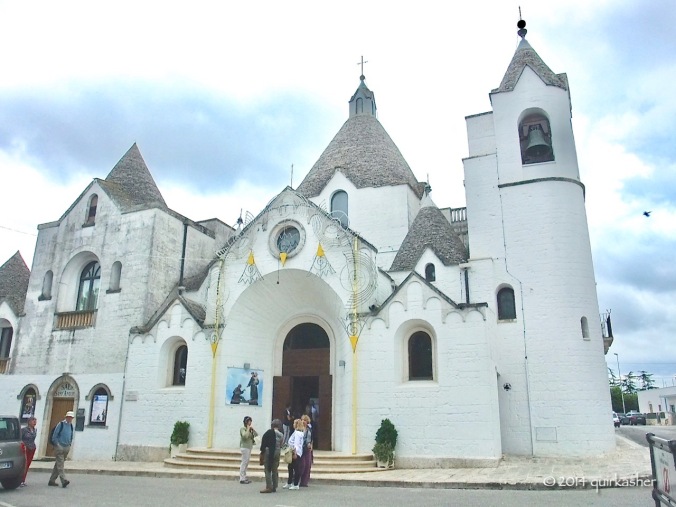 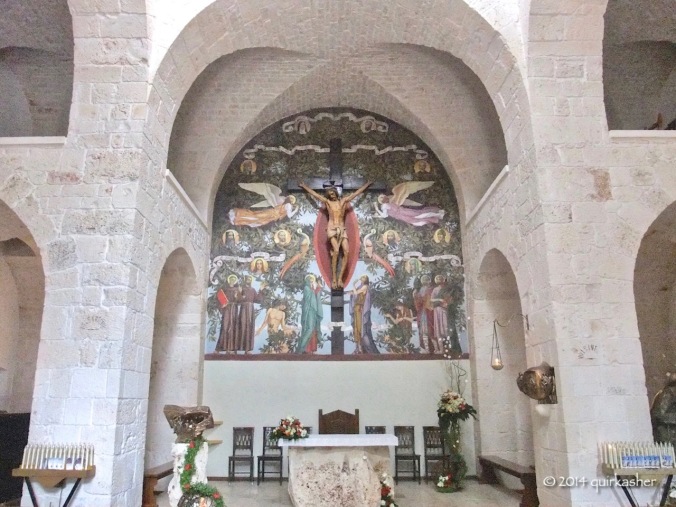 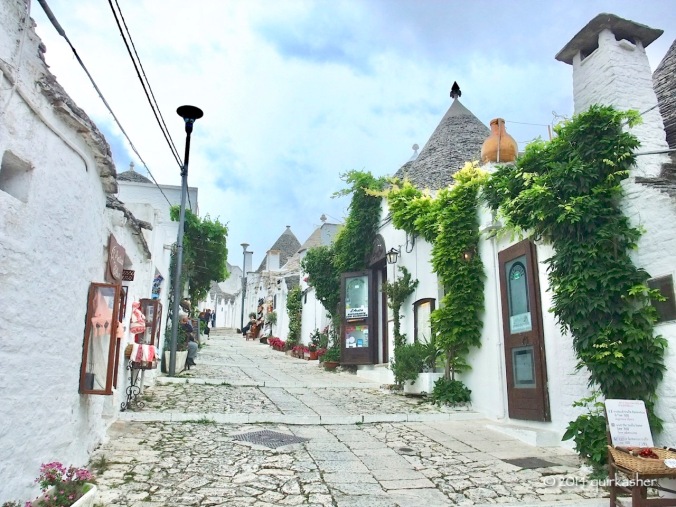 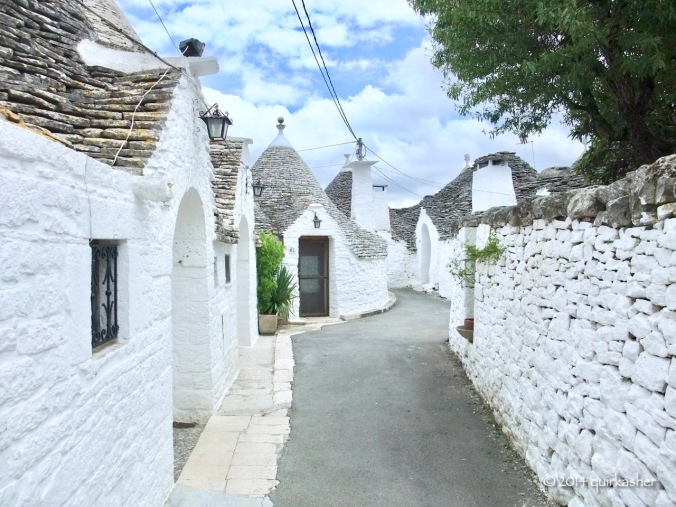 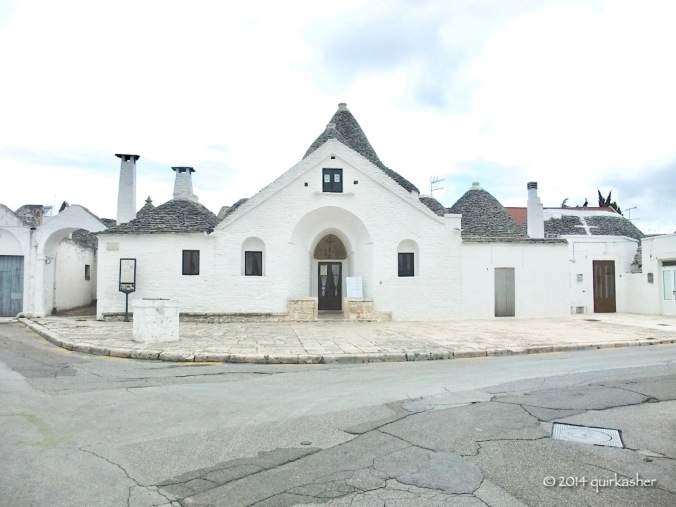 The Trullo Sovrano is the only 2-storey trullo in town and it is now a museum to show what living in a trullo used to be like. 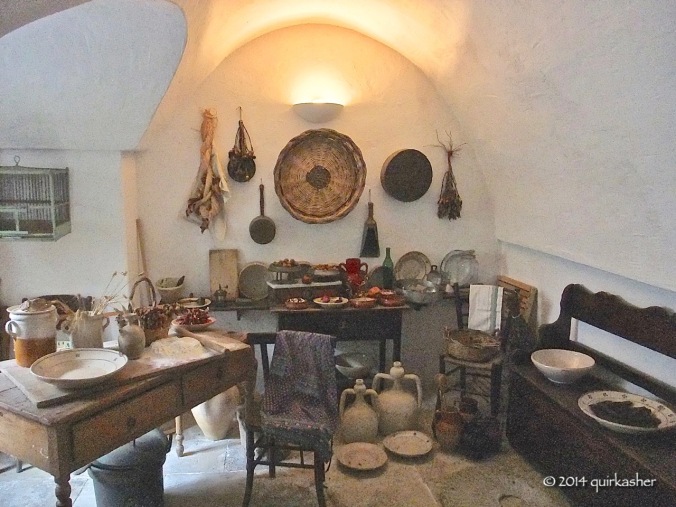 Compared to the trulli, the Basilica of Sts Cosmas and Damian looked rather mediocre! But there are some good art work in there. 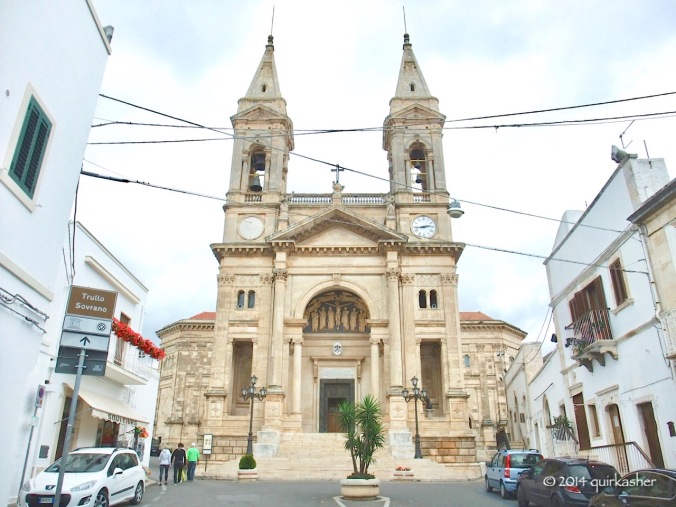 Basilica of Sts Cosmas and Damian 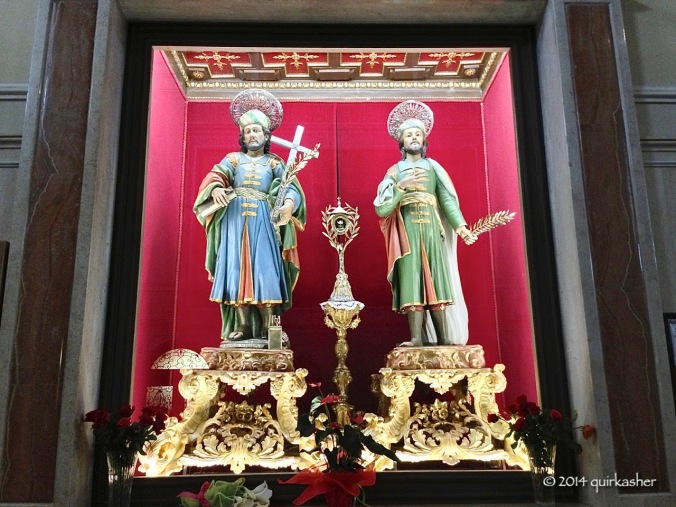 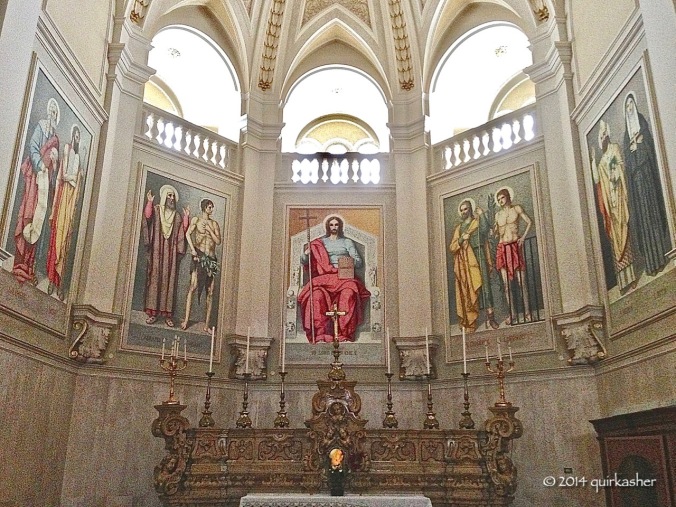 Pictures in Basilica of Sts Cosmas and Damian

Alberobello is not a big town and it looked like it is possible to see everything in less than a day. After a few hours of exploration, I felt like I had done the place justice although if given the time I would gladly have stayed around longer to admire the uniqueness of the trulli. 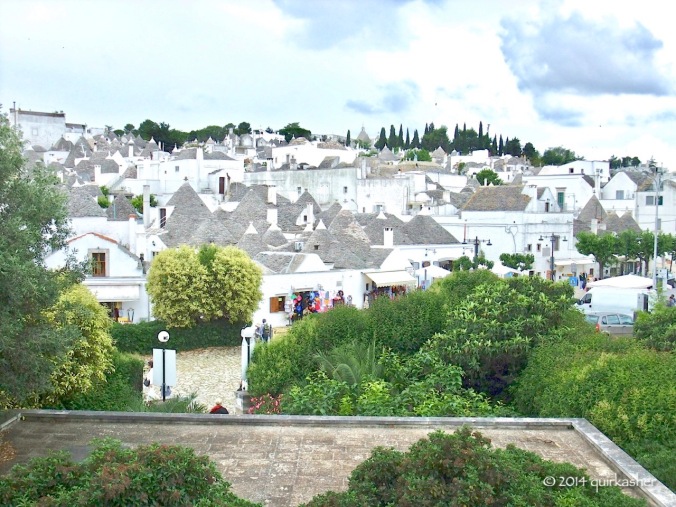 Next stop, Matera, and that is also another really unique place. They may not make good customs officers but these Italians sure make special places to live in!