I was feeling quite frustrated with my situation then. It had been 3 months since I started looking for a new job and despite having sent out more than ten applications I was only asked by one company for an interview. I also did not get the job.

F was going to Taipei for a long weekend and invited me along. After a little consideration, I accepted his invitation. J was also going and since I had not met him since secondary school it was a chance to do some catching up. F, J and I were classmates for 2 years.

It was going to be a short trip. F and I would stay three nights while J would stick around an additional night.

To be honest I had never really thought much about Taipei as a holiday destination. It is a very popular destination for Singaporean holiday makers no doubt, but they mostly go there for food and shopping. I am not a foodie and I abhor shopping. That all made Taipei a rather unattractive place to be for me.

Why did I even bother agreeing to go? I guess I needed a break from my frustrations and I finally decided to have an open mind. If I were to dislike Taipei then at least I should give it a chance and find a real reason to dislike it.

We did very little in Taipei. F and I would sleep till really late in the day while J worked in the morning. F got to know some folks working at this bar and he would go partying with them till morning. The three of us hung out together only at night for dinner and drinks. I have no idea what sort of holiday this was and it was hardly the sort of frantic must-see-everything trip I am more familiar with.

Nevertheless, I did manage to do some sightseeing in Taipei. I made it a point to visit the National Palace Museum which holds a portion of the treasures of the Forbidden City. It was I think only about a fifth of the total collection but was still a really huge collection. Not all of the artefacts can be exhibited at any one time and so are rotated every few months.

The highlights of the museum are supposed to be two pieces of stone. One is a piece of jadeite carved into the likeness of a cabbage with two grasshoppers on it. Another is a piece of jasper carved to look like a piece of pork cooked in soy sauce. I have no idea what the big deal was with them. The real highlight for me was this artefact consisting of seventeen or eighteen unbroken and unconnected layers of ornately carved ivory globes. It is today a mystery how the artefact was created. The one in the museum is the only one of its kind left. As I admired the masterpiece I thought that I was going to cry. Its creator was an absolute genius!

Taipei central was extremely crowded that weekend. My visit happened to coincide with the almost month-long Sunflower Student Movement and there were students with sunflower stickers on their shirts everywhere. They were protesting the signing of the Cross-Strait Service Trade Agreement with China since they perceived that the treaty would affect Taiwanese economy and political freedom.

Heading to a rally

Taipei City itself was not particularly exciting to me but I managed to visit some places in New Taipei City, an area surrounding Taipei City but administratively a separate city. F and I visited Tamsui and Wulai over the weekend while J spent his time, when not working, shopping for bicycles. It was apparently cheaper for him to get one in Taipei.

I think people mainly go to Tamsui to eat. It was practically a food market with shops and stalls everywhere selling all sorts of Taiwanese street food. I never really realised how wonderful Taiwanese food culture was until I got there. It seems as if people believe Hong Kong to be a food paradise but to be honest I never thought the same way. As compared to Taiwan, Hong Kong’s food culture is downright uninspiring. F and I had dinner on the streets and stuffed ourselves silly with anything that looked interesting. I discovered that Taiwanese sausages were absolutely delicious.

Wulai is a place for hot springs. F and I however did not go there to enjoy them. F wanted to see the waterfalls. 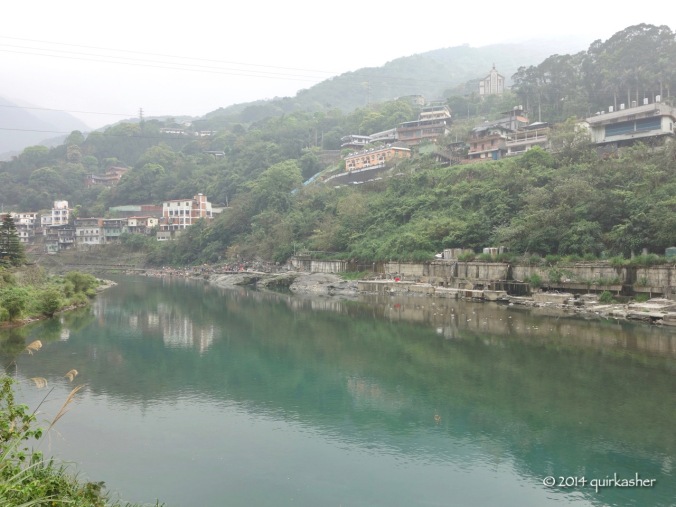 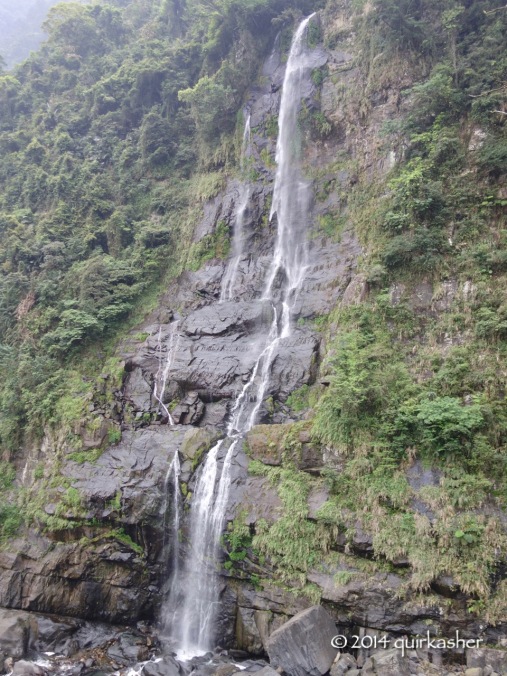 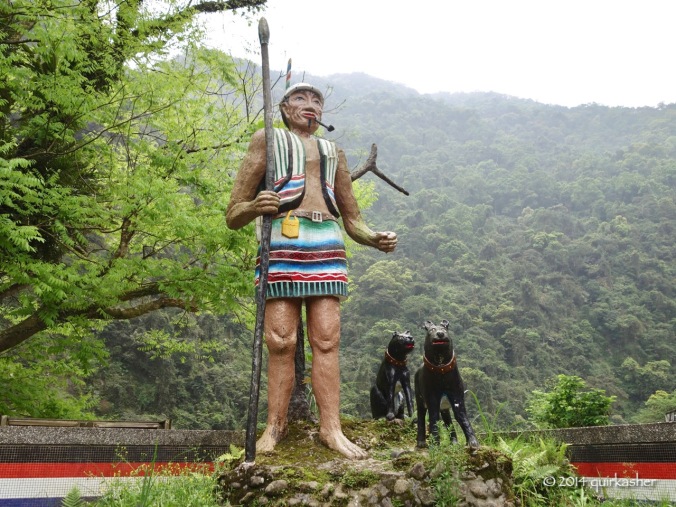 I honestly did not find Wulai pretty at all although admittedly it was a pleasant place. It was a quick tour and the main thing that we did in Wulai was again to eat. I tried their muar chee and found the ones I had fluffier than what I was accustomed to. I much prefer my muar chee chewy.

I have to say that I was pleasantly surprised by my experiences of Taipei. The people were generally friendly and the food culture was amazing. That got me wondering about the rest of the island. I never thought that I would become so curious about Taiwan.