The world would never allow itself to forget the Holocaust. However I wonder how many people know that before the Jews the Germans had already had some practice on the Hereros.

Between the 19th to early 20th century, the European powers were in the midst of their Scramble for Africa. Germany managed to wrangle for itself South-West Africa, today’s Namibia. As per the usual practice of the time, the German colonists came and took whatever land they wanted. The locals were very conveniently forgotten and all rightful claims they made on the lands were very conveniently ignored. That, and other abuses of the colonists, resulted in continual resistance efforts by the locals and then in 1904 all hell broke loose. The Hereros and some other tribes like the Namas killed some Germans. In retaliation, the Germans started their genocidal acts against the Hereros. Many died or fled to neighbouring countries. Most of the male survivors were executed and the women and children either driven into the desert or sent to work in concentration camps. In the concentration camps the Germans did to their African prisoners what they would later do to the Jews. The Germans even gave the Hereros their own early version of Dr Mengele.

It was only a hundred years later in 2004 that Germany finally accepted responsibility for the genocide of the Hereros and officially apologised. That was a very civilised act and show up certain other WWII aggressors as rather inhuman.

With that bit of history in mind, we left Damaraland and approached the Atlantic coast to reach Swakopmund. We then drove along the coast in an area known as the Skeleton Coast. It was given this name apparently because of the skeletons of whales and seals that were once found here. Whaling was a viable industry back then. Nowadays the name is still appropriate but because of the remains of ships along the shore.

Shipwreck along the Skeleton Coast

Swakopmund, the mouth of the Swakop River, is a town on the Atlantic Coast. It was founded to become the main harbour for the German colony. There is a much better harbour at Walvis Bay nearby but that belonged to the British. During the Herero Wars there was a concentration camp in town.

With the cold Atlantic Ocean on its west and the Namib Desert on its other three sides, Swakopmund enjoys cool dry weather year round. I also loved it that the town had so many colourful colonial era buildings. It was really quite pretty. 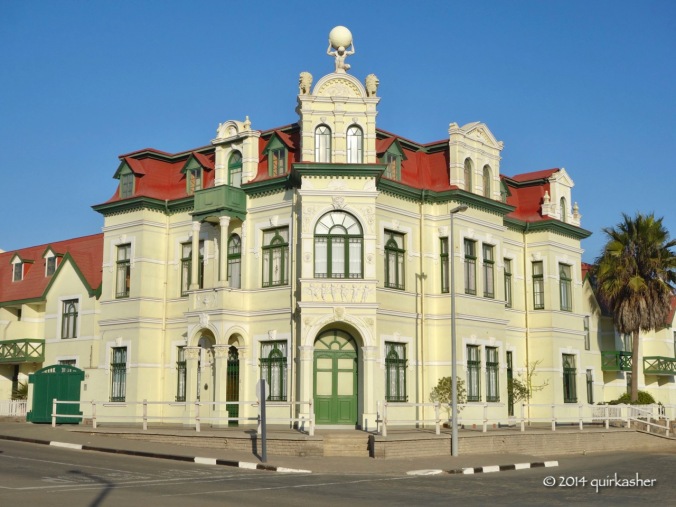 I took a walk around town with Al and C on our free afternoon there. We eventually ended up at the crafts market and were the traders there friendly. Al and C were more open-minded and struck conversations with them easily. I was a bit more careful and in any case I never really enjoyed conversations with strangers whose ultimate aim was to make sales. I did speak to one for a while though. He was originally from Cabo Verde and he told me about his encounter with an American. He had told the American that he was African and the American then went into how he had once met someone from Ghana. The American obviously did not think about what it would have felt like if he had told the African that he was American and the African had told him that he had met someone from Colombia before. I think a pet peeve of many Africans is the assumption by many foreigners that Africa is a country and not a continent of many different countries and ethnicities.

Another trader was not so friendly though and pissed me off tremendously. I told him that I did not shop. I suppose that was strictly speaking untrue and so he pursued that angle and asked me how I got my clothes. I told him that I had no use for the engraved malakani palm nuts he was trying to sell me and he insisted that I could hang one on my bag. I insisted back that I was not going to buy one. He then asked if I did not want to support him or I only bought things from malls. I seriously wonder if he had much business with that charming personality of his. After this encounter I decided that I had had enough of the crafts market and went outside to wait for Al and C.

The Swakopmund Museum was an interesting place to be to learn a little about the history of Namibia and the town.

One very interesting exhibit I came across at the museum was about the clicks of the local languages. I was quite amazed to learn that there was more than one type of click being used. In fact, there could be over twenty different types of clicks being used in some languages. There was a machine in the museum that demonstrated four of them. I could hardly differentiate between them much less imitate them correctly.

P told us that Brangelina and family often took vacations in Swakopmund. I can understand why. I did enjoy my short time in the city too.

Wild seals in the harbour

Sunset at the beach

Sunset at the beach 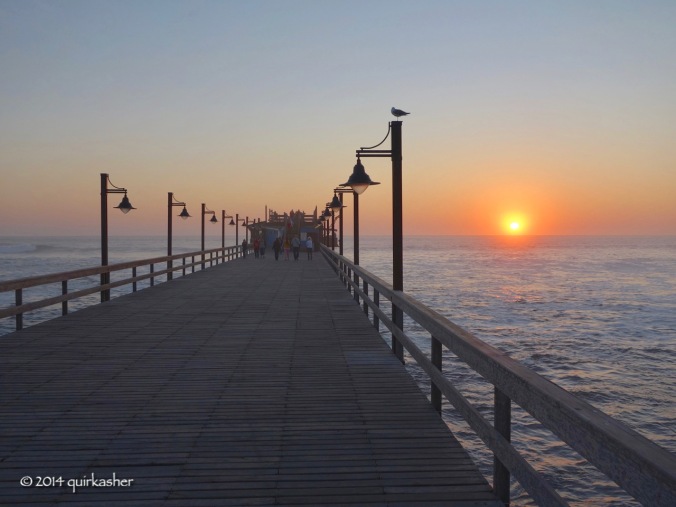 Setting sun from the jetty

Most people come to Swakopmund I think to enjoy the adventure activities operated in the area. The group was offered some of these, at own expense. I almost wanted to stay in town and have a relaxing day on my own instead. But I am glad P managed to change my mind.

I joined Dl, Ar and J on a desert adventure on our second afternoon in town. It was actually a tour operated by one of the companies in Walvis Bay. The guide, a German gentleman, took us, and an Italian couple on their honeymoon, on a four-wheel drive through the Namib Desert outside Walvis Bay.

Saltworks in the desert

We drove into the Namib-Naukluft National Park. It was an amazing drive through interesting landscapes and we went up and down the really high dunes. It was not so exciting going up one but going down was definitely fun. I kept begging the guide to go faster but the ladies, except J, were screaming too much.

Driving through the desert 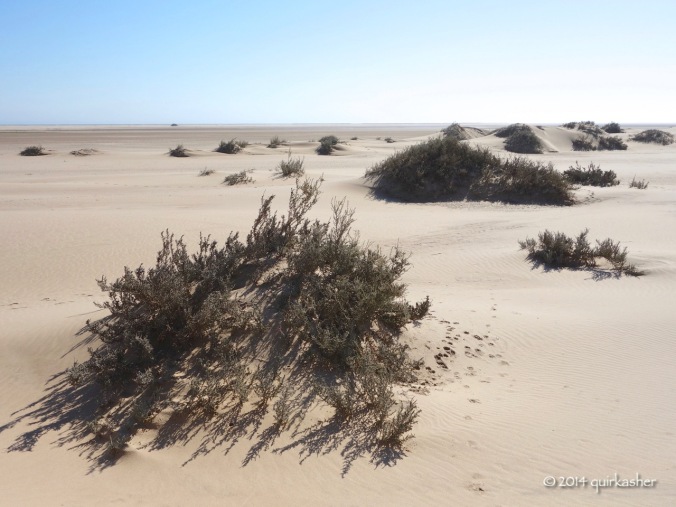 We drove up to the coast where the desert met the ocean. It was quite an awesome sight seeing a place so full of water and another so devoid of water meeting. 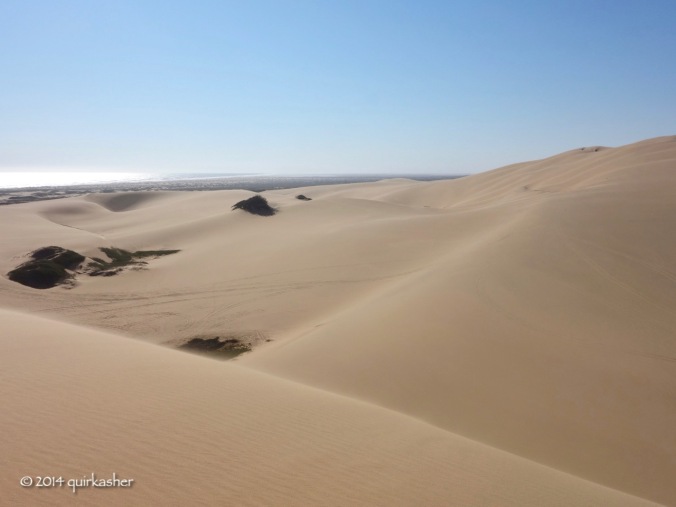 Where the desert and ocean meet

I finally saw my snake at the desert. A guide leading another tour had found a sidewinder and was trying to get it into his hat. The poor twenty-centimetre long snake was expectedly not amused and refused to cooperate. In the end we made do by observing it on the sand. I was ecstatic to have seen the snake. 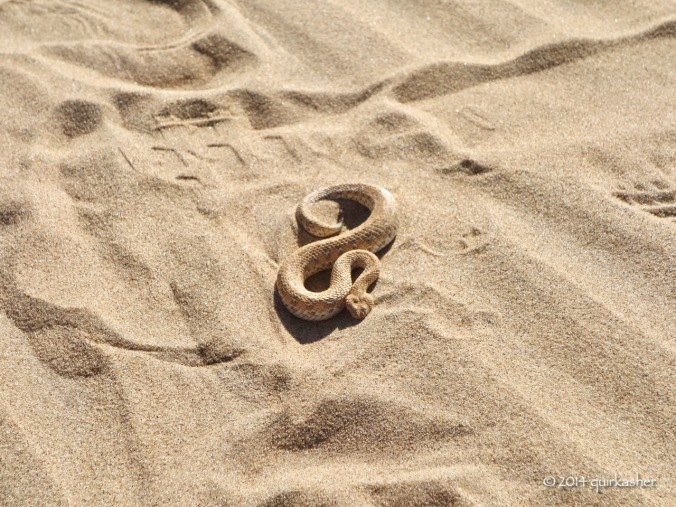 Our guide also showed us a plant growing in the desert. It was the !nara. Our guide helpfully called it the “nara” for our sake but we learnt from P later that it was really the “!nara” with a click. Trying to pronounce the name the same way as the locals do is terribly difficult.

The !nara is a pretty nasty plant, all tangled vine-like stems with no leaves and full of thorns. Our guide tricked us into tasting a bit of the stem. I was the last person to taste it and have to thank my travel mates for keeping a straight face to not spoil the surprise for me. The stem was terribly bitter! Despite its bitterness however, it is an important plant for the animals living in the desert. The !nara is firstly a source of water and secondly the bitterness of the plant is transferred to the animals’ flesh and makes them unpalatable to predators.

The melons of the plant however, when ripe, were delicious. Our guide let us try a bit. Its yellow flesh was sweet and juicy.

I can imagine the animals enjoying the melons but not the stems. On the other hand it is the desert and they need to use whatever water they can get.

We saw one of these animals along the way and Dl decided to get off the car to get a better picture of it. The springbok however ran away even before she took more than a few steps away from the car. She failed to get any picture of it at all.

A springbok living in the Namib Desert

Before we left the desert, our guide drove us to the top of a very high dune. He then distracted us by telling us to look at a jackal in the distance before letting the car slide down the dune backwards. We were definitely caught by surprise. 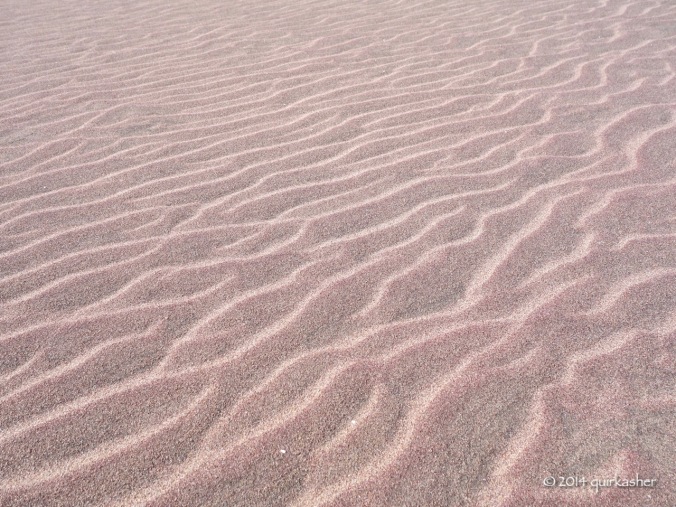 Windblown patterns on the desert sand

Dl continued her animal scaring streak before we reached Walvis Bay. There was a flock of flamingoes in a lagoon and they moved away when she tried to get closer. 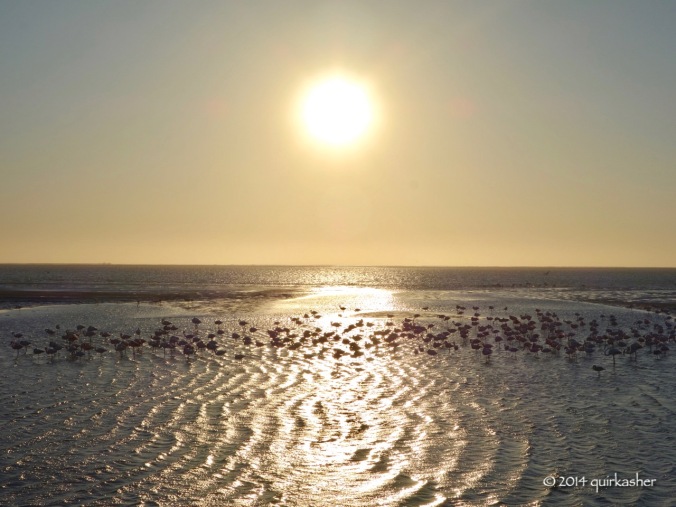 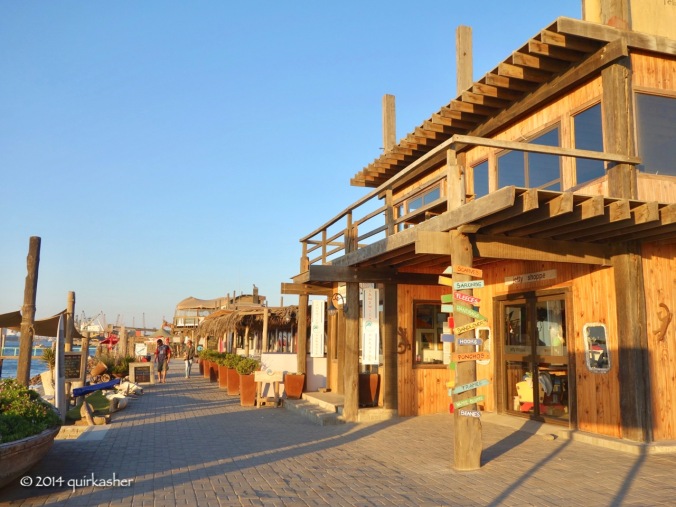 I had dinner with P and the Canadians at a steakhouse in town. The Belgian family had decided to have their own family dinner while Dl had gone to meet her relative who happened to be living in Swakopmund.

I ordered a huge steak and it looked absolutely delicious. I had forgotten of course that looks could be deceiving. Although its flavour was not too bad, the meat was like hard rubber. I think I lost more energy trying to cut it than gain any eating it. After I had finished a respectable portion of the steak I gave up. The waitress probably knew that I hated the steak when I declined her offer to doggy bag the remains for me.

P pointed out a phenomenon to me in the restaurant. Almost all the patrons were white. He was the only black patron. I also noted that besides two Japanese tourists, I was the only other Asian patron. P pointed out that there were still places in Namibia where black Africans were not expected to be at although they were not technically barred from going there. At the restaurant for example the black persons there were expected to be serving and not served. P was with us at the restaurant and so he was not considered odd. I wonder what our white server felt having to serve P and me.

As we were leaving the restaurant we bumped into another black African but he was also with some white people. After all these years, there still remains some separation between the former colonists and indigenous peoples in Namibia with the whites seemingly still occupying a higher stratum in society.

That reminded me of something that Dl had said when we were having drinks with the managers of our Damaraland hotel. The black and white peoples of Namibia, as in her native Zimbabwe, need to work together to move the country forward. The colonists had come like a virus, invading, robbing and exploiting. That painful memory is probably still in the minds of the indigenous peoples. I do not suppose that the pain can be forgotten so easily but I believe that Africans will get over that pain some day. I hope to be able to see during my lifetime the peoples of Africa black or white working together as one equal people.