So here we are at one of the global centres for the manufacture of headaches in international affairs. I had read that it was a far more modern city than given credit for and this was true. Despite all the tension with the West, Tehran is actually rather westernised.

Tehran somehow managed to remind me of Bangkok, at least in terms of the look of the buildings, although the last time I saw Bangkok was more than eight years ago. The traffic was also equally bad in both cities. But Tehran seemed much cleaner.

We got up early to have breakfast and after that F and I went out for a walk around the block. We were somewhere in the city centre and yet everything was quiet. But it was a Friday after all and I suppose everyone was sleeping in like we would at home on a Sunday.

Our grand tour of Tehran started at the grand Golestan Palace. This was the official residence of the Qajar kings and later used by the Pahlavis for formal events. The palace is a blend of Persian and European styles and it  consists of a group of buildings surrounding a central garden.

Many halls in the palace use a whole lot of mirrors as decoration and in a way those halls did look rather opulent that way. I however thought that the lovely tile works found all over the palace compound were much more special. 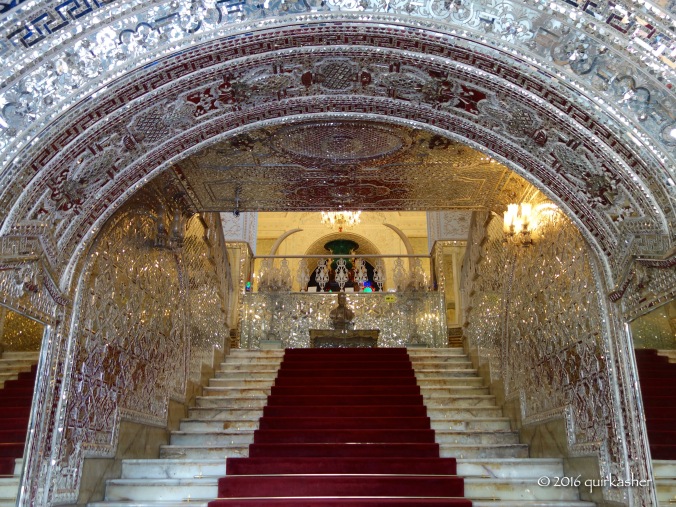 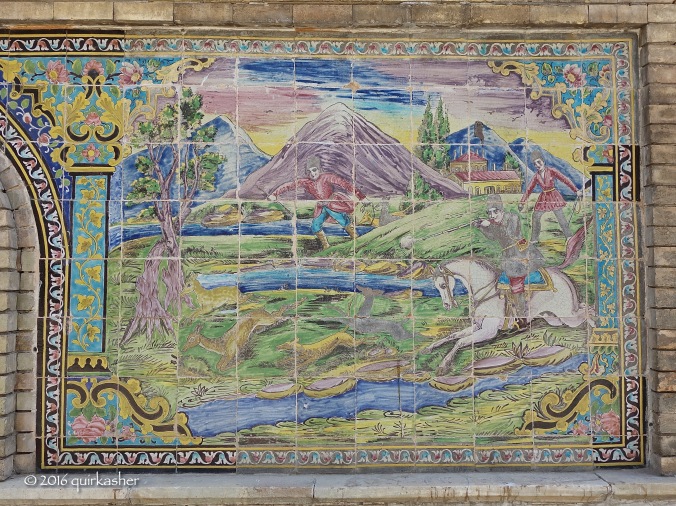 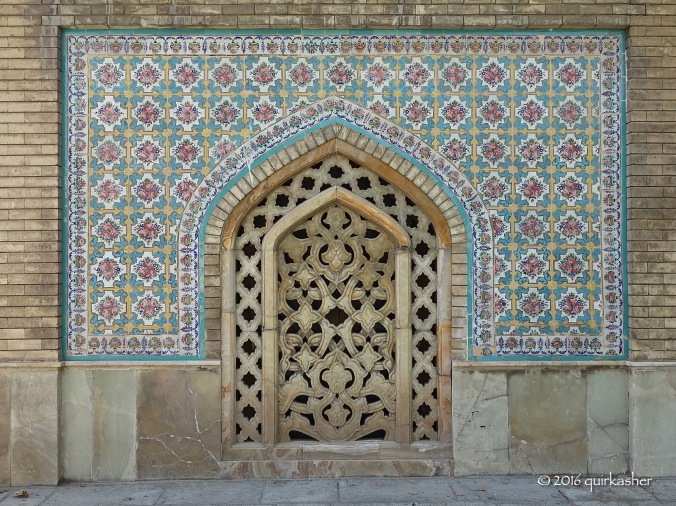 There is another palace that was also European inspired. The Saadabad Palace, built by the Qajars and then expanded by the Pahlavis after them, is a palace complex built within an expansive woodland park.

Entering the park of the Saadabad Palace

In the little time that we had we only got to visit the Green House. Unlike Golestan Palace, I can remember my walk back to the gate through the lovely green park after my visit to the Green House (we took an internal shuttle there to save time since it was an uphill walk) but I cannot now remember much of what I had seen inside the building. I suppose that shows how much the visit meant to me. Nevertheless I do vaguely remember that there was a room covered with mirrors, like many of the halls in Golestan Palace, and wondered how anyone could live in a place with so much glare. 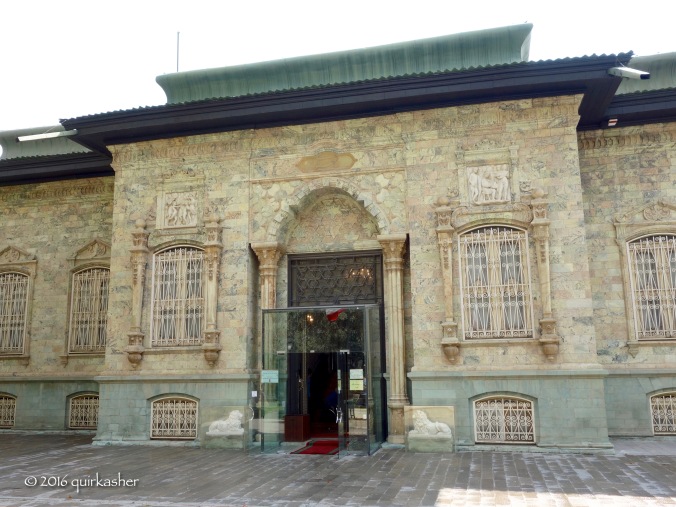 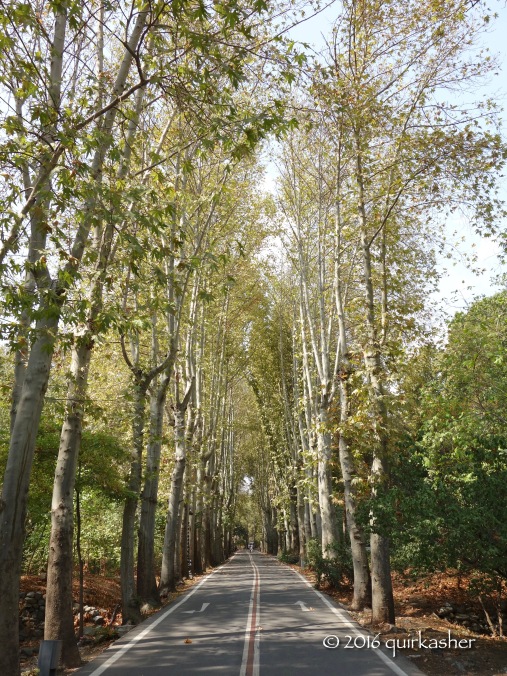 The visit to Tehran however was more for its museums. We visited three of them.

The National Museum of Iran, although not too big, hosts quite a rich and important variety of ancient Iranian artefacts. We were informed at the museum that a stone stele there carried the original engraving of the Code of Hammurabi. Wikipedia however tells me that the original stele is in fact in the Louvre, taken away more than a century ago from the site of ancient Susa in Iran. I suppose I should have been suspicious then when I was told that such a famous and important artefact had not been taken away to Europe. 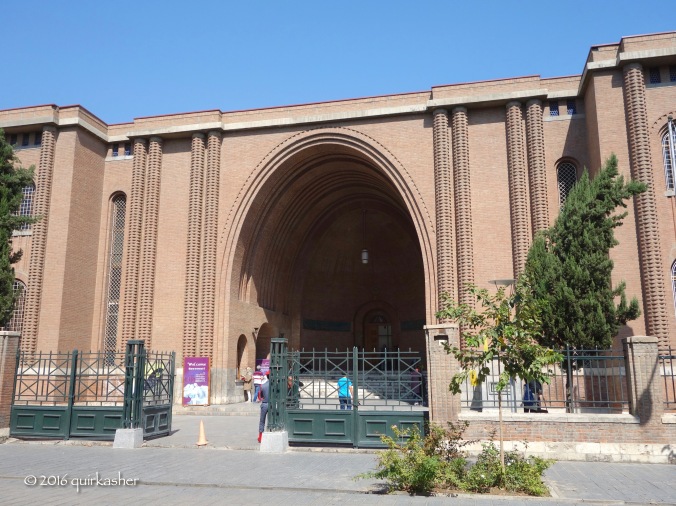 Statue of the Noble Parthian Man

Head of a man, the Salt Man, discovered in a salt mine 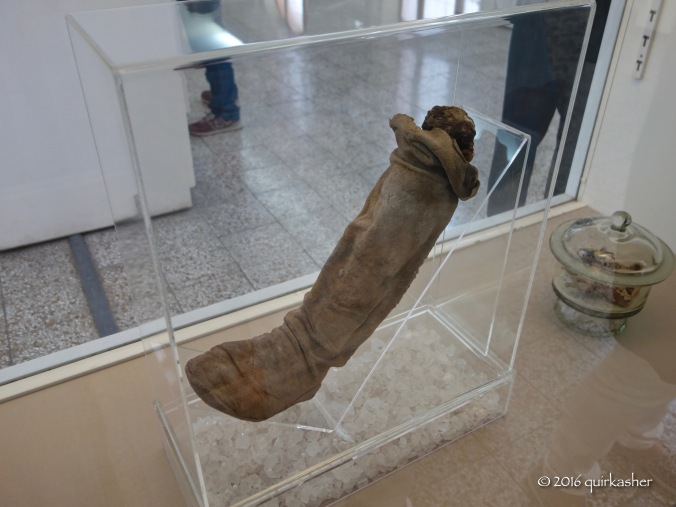 Column with bull capital from Persepolis

The Carpet Museum of Iran was pretty interesting. It exhibits carpets from all around Iran and many were quite beautiful. 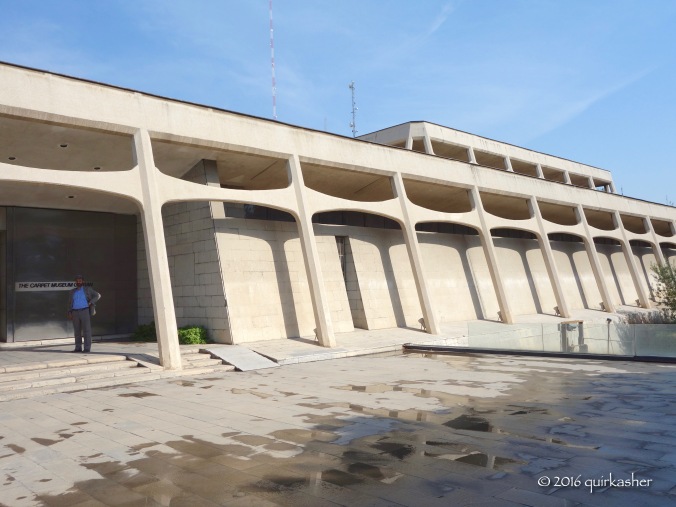 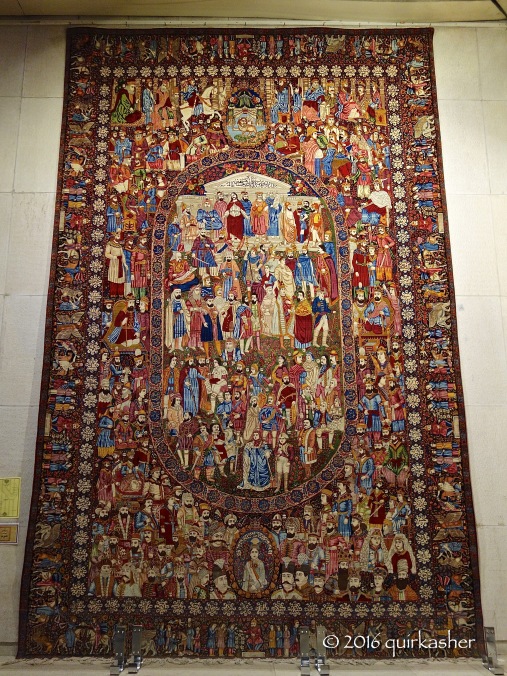 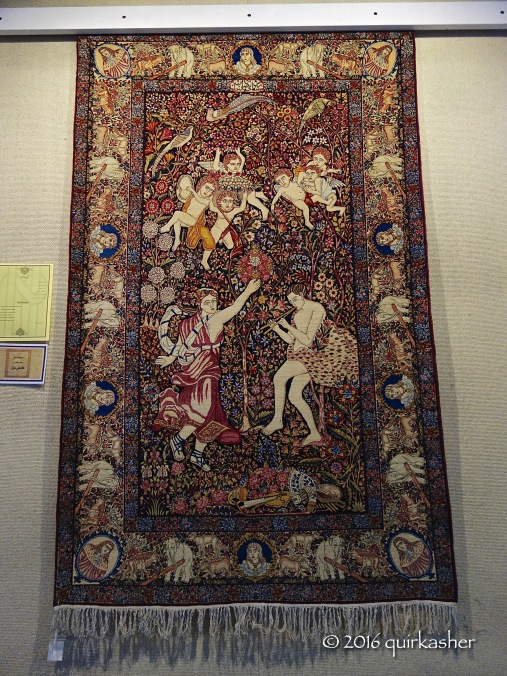 The Reza Abbasi Museum contains three or four floors of beautiful Persian art and craft from both the pre-Islamic and Islamic eras. I thought that this was the most charming museum that we had visited. 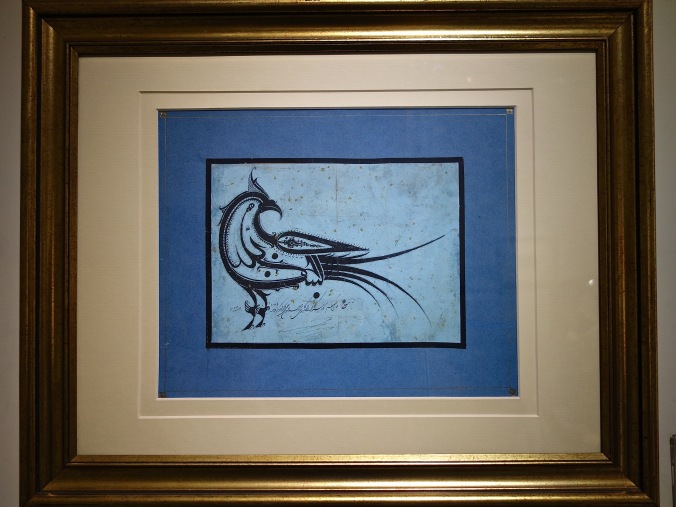 My favourite item in the Reza Abbasi Museum, a word as a bird 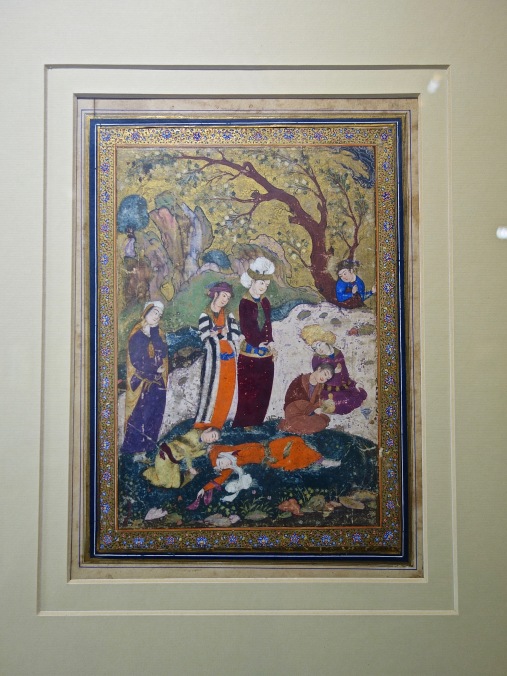 We were however most astonished by the Pahlavi crown jewels on display in the Central Bank. As it was after all the Central Bank, security was very tight. No one was allowed to take any bag or camera into the exhibition room. No photography was allowed at all.

The crown jewels were a formidable collection of bling and after a while we no longer found any of the precious stones all that precious anymore. The highlight of the collection appeared to be the Daria-i-Noor, a humongous pink diamond. In the dim light of the room it was quite difficult to appreciate the pinkness. I also have to say that it did not look to me any more precious than any of the other very many stones in the exhibition.

Like the Koh-i-Noor, the Daria-i-Noor was mined in India. One of the Persian kings invaded Moghul India and took the two diamonds away together with the legendary Peacock Throne and a whole lot of other valuable items. The Koh-i-Noor is no longer in Iran but among the crown jewels in London. As for the throne, it was rumoured to have been modified into the Sun Throne that is also on display as part of the crown jewels here, but there is apparently no conclusive evidence of this.

The look of Tehran in general seems somewhat seventies. However if one were to look deeper, or go further out of the centre, the city was actually far more modern and wealthy. We went to the suburbs for lunch at this hip new restaurant opened by a Tehrani in his early thirties. It was in a posh area and we were a little surprised to find quite a few Western luxury brand boutiques and nice looking apartments. Of course certain brands cannot be exported here directly from their countries of origin but the Iranians are able to get them from Dubai. Yes, Iranians use iPhones too and even sell them in shops. 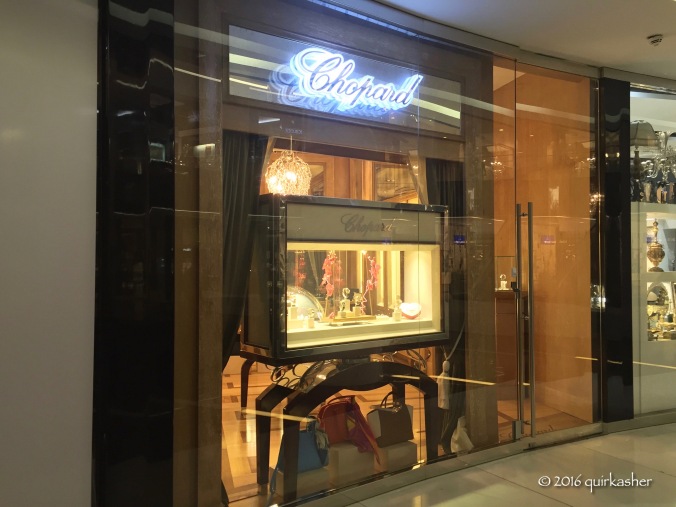 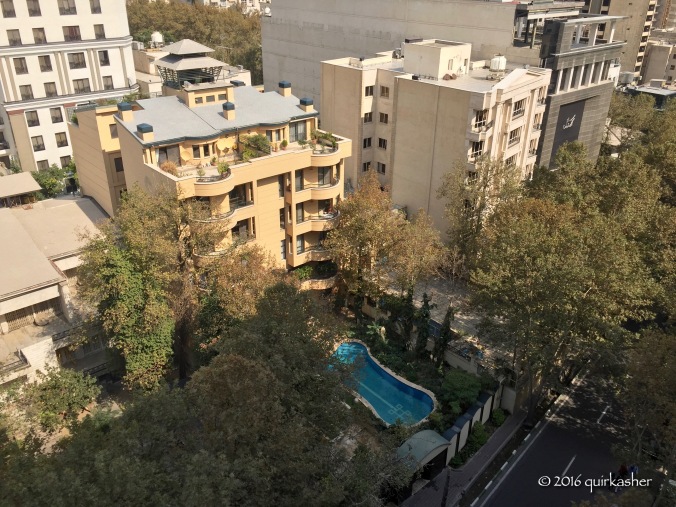 The restaurants we had our meals in were not exactly rundown street stalls and they were not short of customers. At one particular rather ordinary looking restaurant we had lunch in, a meal could cost up to USD 30 per person and there was a long queue at the door when we left.

Tehran, or Iran as a whole for that matter, is obviously not the isolated backwater shunned by the whole world as it is often made out to be. It looked quite prosperous in reality.

I had also read somewhere that Tehran was considered one of the most dangerous cities in the world. I am not sure what the basis of that assessment was. Some of us did take a short walk in the crowded city centre that Friday night. I am not sure if we had been lulled into a false sense of safety since throughout the trip so far we had been travelling as a group, driven everywhere and accompanied by an experienced guide, but we felt entirely safe during our walk.

The local cinemas were at the time of our visit showing an Iranian-made epic film about a young Muhammad. I think it caused quite an uproar in the Sunni Muslim world and was criticised for degrading or mocking Muhammad. This however did not stop the movie from being screened publicly and widely in the country. 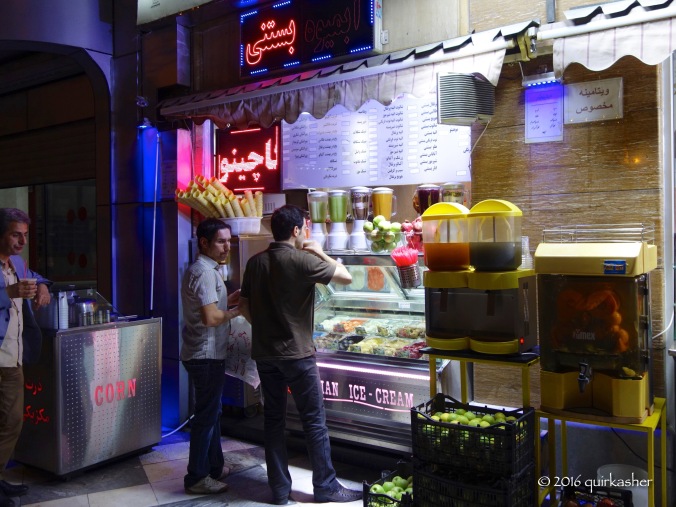 Tehran has a metro system that from what we have seen is cleaner than any metro system I had seen in Europe thus far. We did not have time for a ride but satisfied our curiosity by walking till as far as the ticket gantry before the escalators to reach the train platform.

Going down into the metro station

At the metro station

The station looked comparable to the ones in the major Asian cities. LH managed to convince the attendant on duty at the time to allow us to snap some quick photos of the station. This was in fact not allowed but LH was not going to take no for an answer. Acting under a sense of Iranian hospitality, the attendant agreed to close an eye. It does appear to me that we had been guilty of moral blackmail.

I think Tehran let me feel more than in the other Iranian cities the sharp contrast between politics and life in general. While the fighting goes on and on in the international arena, and Iran is painted worldwide as a monster of a country full of dangerous terrorists, Iranians go about their lives just like I do at home. What I was able to see for myself in the short two days that I spent in the city told me that most ordinary Tehranis were probably a lot kinder than many foreigners who saw themselves as modern civilised people. 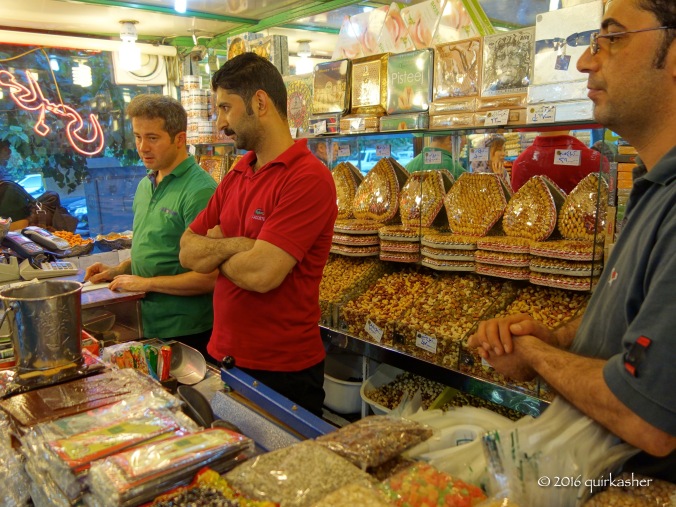 At the nuts shop