It was a 10 hour bus ride through the night to Cordoba. The bus that I was on was really quite comfortable. I particularly enjoyed the starry skies outside. I had heard before that more stars could be seen in the skies of the southern hemisphere than the north and I discovered the truth of that claim first hand. It was as if all the constellations of the universe were visible on that one same night. That had been such a wonderful ride.

I arrived at Córdoba at about 8 in the morning. This was terribly early, at least to me, and the streets were still somewhat quiet at that hour. I had booked a room at the Azur Real Boutique Hotel, ranked number one in Córdoba on Tripadvisor, and they were able to give me a room that early in the morning. I have to say that the hotel was brilliant. It absolutely deserved a high rank on Tripadvisor.

Córdoba was my final stop on my South American grand tour and I did not quite expect that my visit of the city and the area around it would end up being such a religious one. Almost all of the places I visited were either churches or buildings related to the Church. It was probably a sign to me that I needed to be more attentive to my religion.

In any case the main attraction of Córdoba really was the Manzana Jesuítica, or the Jesuit Block, so it was quite hard for me to avoid anything religious anyway. This was a group of buildings mainly consisting of a church, an university and a school and was built by the Jesuits in the early 17th century. The Jesuits of course were almost everywhere in South America and Córdoba was just one of those places where they had left their mark on.

About 150 years after the buildings of the Jesuit Block were established, the Jesuits were expelled from South America by the Spanish king then and the Block was handed over to the Franciscans. I think the expulsion had something to do with the king’s suspicion of the Jesuits since they were so successful and swore allegiance only to the Pope. The Jesuits however were allowed to return in the 19th century and the Block was handed back to them. The university and school were however nationalised a year after their return.

The church was plain on the outside but beautiful on the inside. The sight of the exterior definitely did not prepare me for its interior. The part of the university in the Jesuit Block was its old administration building and can be visited on a guided tour. As for the school, called the Colegio Nacional de Nuestra Señora de Montserrat, I just waltzed in to have a look around when the students started streaming out indicating to me that lessons were done for the day. 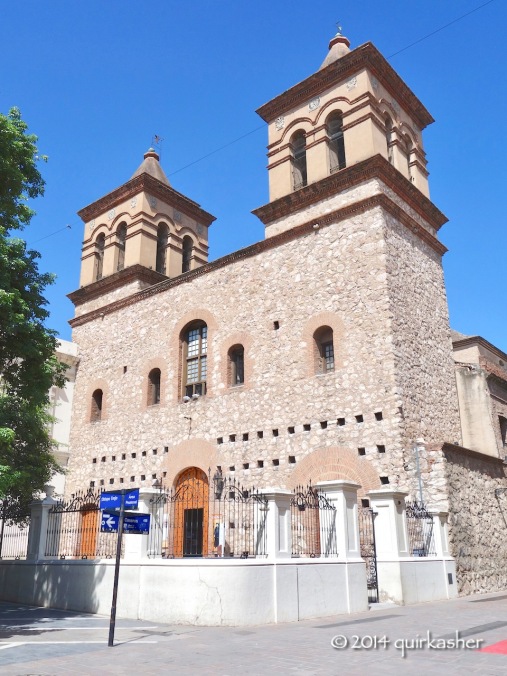 The Compañía de Jesús Church in the Jesuit Block 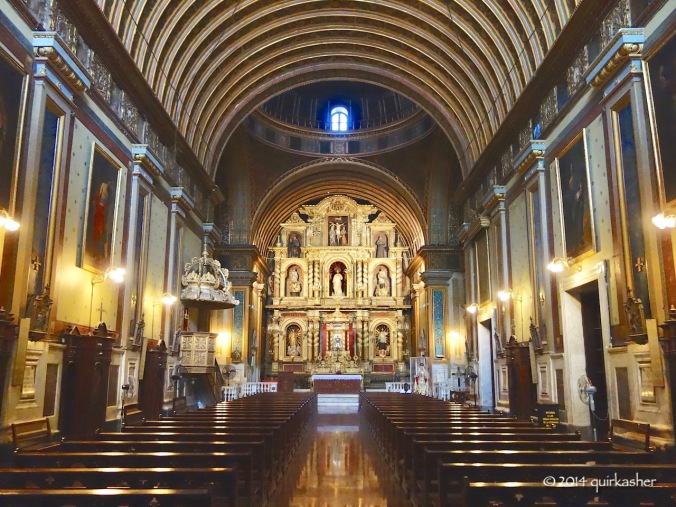 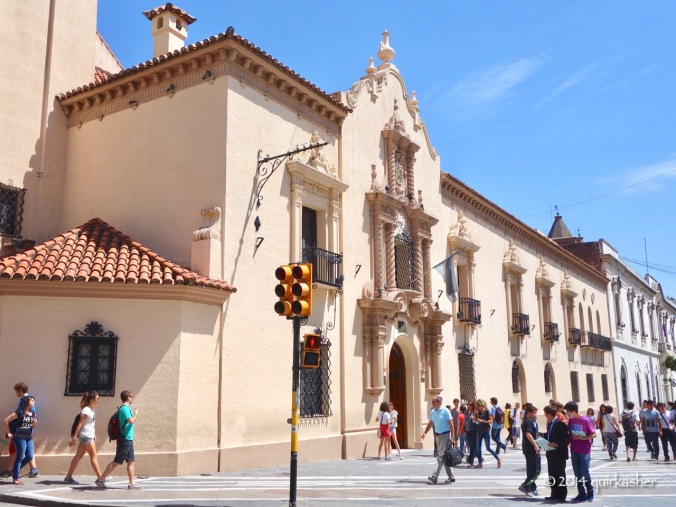 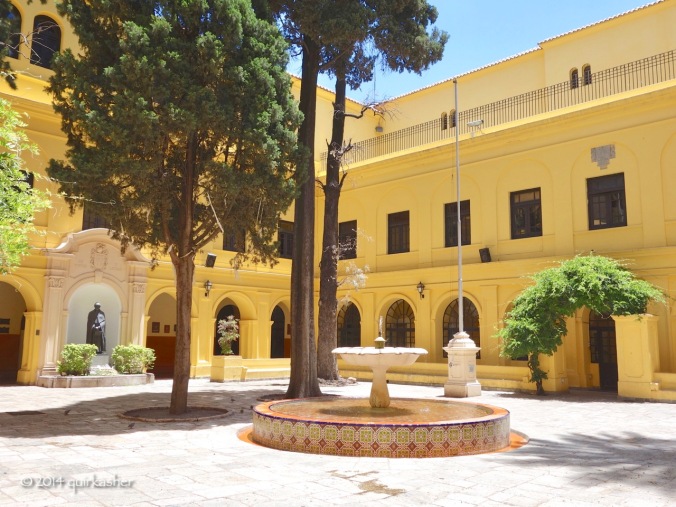 Courtyard in the colegio 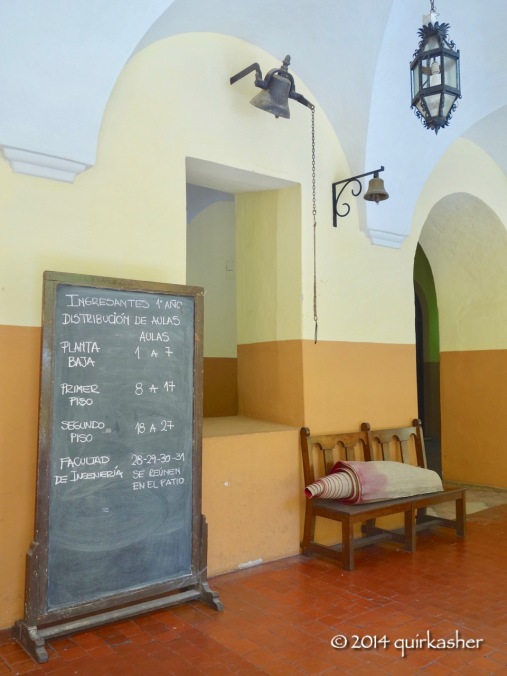 By the courtyard in the colegio

Córdoba is of course much more than just the Jesuit Block. There are also other beautiful churches in the city and I will just name three that I had popped in for a look. The Córdoba Cathedral is one of them. Its interior looked as if it was plated in gold everywhere. The murals on its walls and ceiling were really gorgeous. 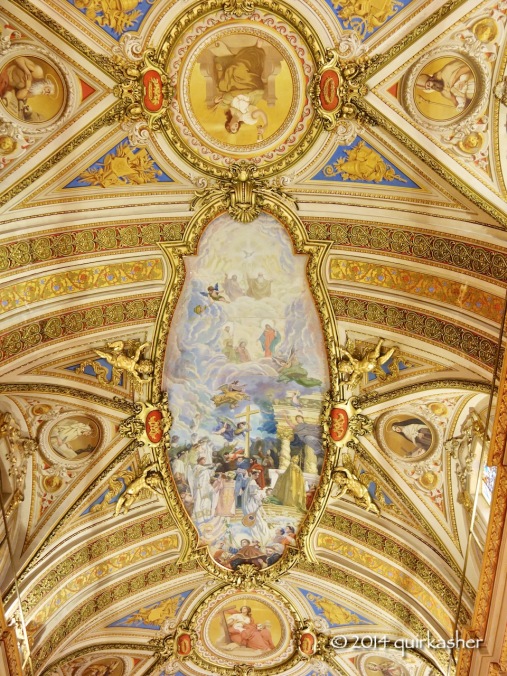 The Church of St Teresa is part of a working convent for a cloistered order of Carmelite nuns. Only the church is open for visits.

Inside Church of St Teresa

Another church that was definitely worth a visit was the Church of the Sacred Heart of Jesus. This is a Neo-Gothic church whose interior was subtle and pleasing. It was different from the more opulent ones of many other South American churches and a refreshing change for me.

Church of the Sacred Heart of Jesus

Inside the Church of the Sacred Heart of Jesus

Although considered a big city (it is after all the second city of Argentina), Córdoba is quite unlike Buenos Aires. There was none of that constant overwhelming feeling of being harried that the capital gave me. And with the large student population, Córdoba felt young and lively. 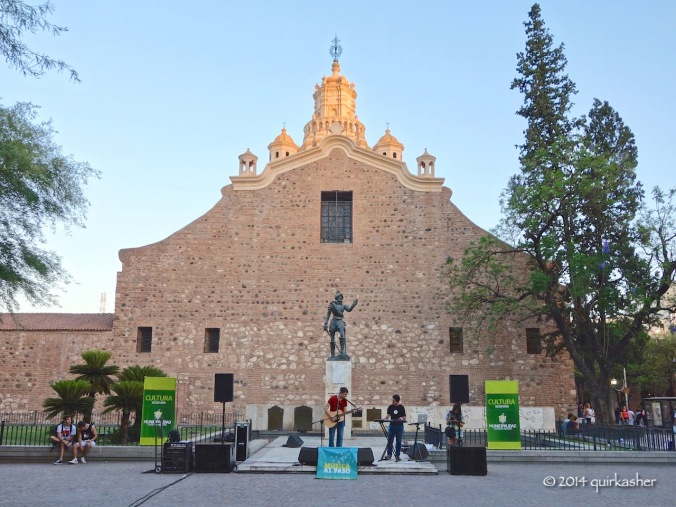 A gig behind the cathedral 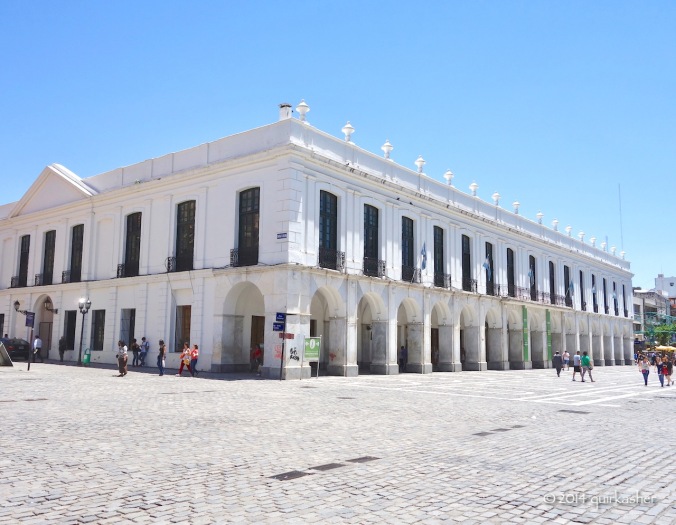 In order to fund their work in the area, the Jesuits set up various rural estates around the province of Córdoba called estancias. The layouts of the estancias I visited were largely similar. Each had cloisters or buildings enclosing at least one patio and a church on one side. The estancias were involved in farming and the manufacture of wine, glass, metals and other goods. In time, towns developed around these estancias. I managed to visit three of them and those visits also gave me the chance to see a bit more of Argentina.

I went to the tiny town of Jesús María first and this was easily reached by colectivo from Córdoba. 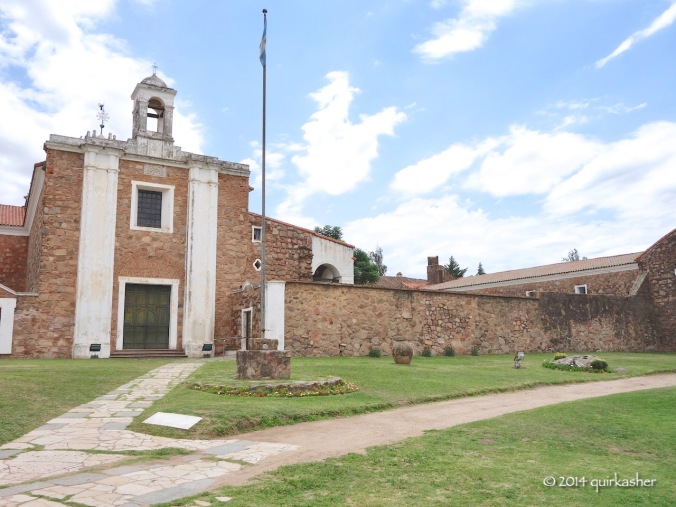 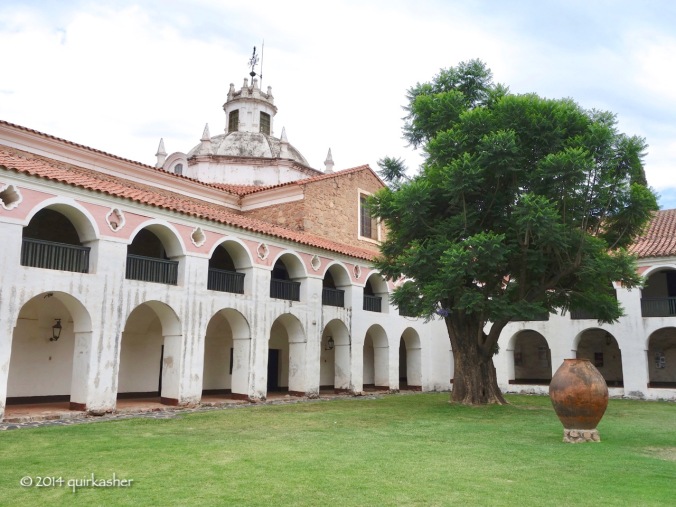 Jesús María actually looked more like a suburb of Córdoba than a town in its own right. It looked almost deserted when I was there on a Friday.

Very pitiful and yet scary looking Jesus in Jesús María 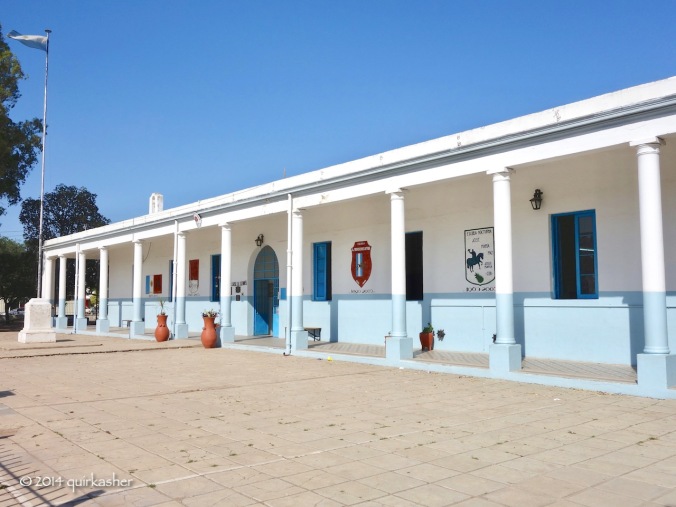 Just next to Jesús María is the separate town of Colonia Caroya. Both of them look like they are in fact part of the same town. Caroya looked like the sort of settlement that I had learnt in Geography class all those years ago called a linear settlement. It seemed to exist only along the highway. The houses there looked like they belonged to upper middle class Argentines but I am not sure if they really did.

Following a map provided by this online iPhone app, I walked to the estancia. I did find a church, but it was definitely just a church. No estancia there. Feeling somewhat cheated, I walked back the to junction between the two towns and asked for directions from the tourist information office there. A helpful lady showed me the right way. The estancia was on the other side of the long road through Caroya along which I had walked. That taught me not to trust maps provided by free apps, particularly if they are maps of less popular places!

The Caroya estancia was really pretty. It was set within a gated compound, unlike the one in Jesús María, and looked like a real rural estate. There was also hardly anyone there when I visited.

Entrance to the estancia of Colonia Caroya

Another outstanding feature of the estancia of Caroya was the remains of a mill and irrigation system.

I also managed to do a day trip to Alta Gracia. It has an estancia of course but is also famous for being the place where Che Guevara grew up. The house that he lived in is now a museum.

Although I am not familiar with him, I definitely felt inspired by him when I realised how well travelled he was. In fact he saw much of South America on a motorcycle and I am already in awe of him just for that. His travels in South America in any case seemed to have had a major effect on his view of the continent and its peoples and made him who he was and contributed to his beliefs of what needed to be done for South Americans.

The motorcycle that took him around South America

The estancia of Alta Gracia looks just like an urban compound in the modern city. Its church is now the local parish church.

There is strangely a Sanctuary of Our Lady of Lourdes in Alta Gracia which is a pilgrimage site. A nice lady at the chapel there tried telling me the story of the sanctuary in mostly Spanish but I managed to catch the story somewhat. One day a priest removed the statue of Mary from its niche in the chapel there for restoration. He then allegedly saw an image of Mary appearing on the wall of that niche. The story later spread and the place became a pilgrimage site.

The chapel at the Sanctuary of Our Lady of Lourdes

There was definitely something lovely in the sanctuary but it was getting late and I needed to get back to Córdoba before it got too late. I had a bus to catch to Buenos Aires that night since I was going home the next day.

When I was planning my itinerary for this trip I definitely had not taken the weather into consideration. I learnt the hard way that summer in at least the northern parts of Argentina is hot and humid. After a day in Alta Gracia I was sweating like a pig and feeling quite gross with myself. Unfortunately I had already checked out of my hotel and so could not take a shower before I left for the bus station that night. I did a quick wipe down with paper towels in the hotel toilet but I was sweating again at the bus station which was quite warm. Needless to say I had a sticky uncomfortable 10 hour bus ride to Buenos Aires. Once I reached the capital I got to the toilet at the Manuel Tienda Leon office where I dumped my bags and got my ticket for the bus to the airport later that afternoon and had another wipe down. However Buenos Aires was just as hot and humid as Alta Gracia and I was sweating like a pig again that day. Luckily I had time at the airport to have a wipe down and a change of clothes. I sprayed on some perfume and I really believe that no one on the plane thought that I was actually filthy!

I told the taxi driver in Singapore on the way home about this and I have to commend his effort at trying not to gag in my face. But I did not think that he would have known that I was filthy if I had not told him. I only got a shower when I reached home more than 72 hours later. I do not remember ever enjoying a shower that much in recent years.

That experience however was just another episode in a series of incredible episodes that happened only because I had finally made up my mind to see South America. I would not say that I had done South America justice at all. There is so much more to explore in that gorgeous continent I know. However, that month I spent there gave me experiences I never thought I could have in my life. I cannot say that I am smarter now but I dare say that my mind was enriched considerably by those experiences. I was also taught a few important lessons about myself in South America. Yes, even that splitting headache in Cuzco was an enriching experience.

I will be back in South America before I know it I am sure.

The content of this blog is protected by copyright. Unauthorised use and/or duplication of all or any part of the said content without express and written permission from this blog’s owner is an infringement of copyright laws and strictly prohibited. All rights are expressly reserved.